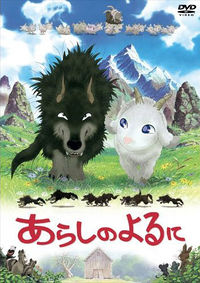 Arashi no Yoru ni (あらしのよるに?, lit. English: One Stormy Night, Italian: Amicinemici), is an animated movie that tells the story of the friendship between a goat (Mei), and a wolf (Gabu). It is 110 minutes long.

The movie is in Japanese and there are apparently no official translations. Ayu completed an English fansub. An unofficial English redub of the movie is available on YouTube (Link), as well as a Japanese version with subtitles (Link). Stormy Night Redub Team composed a complete English-language fan re-dubbing. SNR Team's dub was available via YouTube and Megaupload.

The movie appears to be cut for TV. Every few scenes, the picture is faded to black, as if for a commercial break. However, later on in the movie, the breaks come at varying locations, indicting that it is not a commercial break point, but an overly long transition.[citation needed]