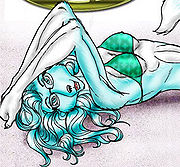 Aquamarine, by Jodimest
Aquamarine is a character in the webcomic Jewel Vixens. Every team needs a tech specialist, and Aquamarine is perfect for the role. A mind that thirsts for knowledge along with a body that won't quit describes her quite well. From picking locks to programming VCRs to hotwiring death-ray machines, she can handle most anything technology-oriented. It was this fact that landed her on the cover of a tech magazine, and being that it was the first time a "bikini babe" modeled for a technology magazine the issue sold out in record time. Her main weakness is the fact that she's very shy and not very confrontational at all, which leads her to an occasional emotional breakdown if she ends up in prolonged firefights. Onyx is usually there to watch over her though, and while not on a mission Aquamarine can usually be seen hanging out with Amethyst in the garage. She shows a passionate affection for the ocean, hailing from Miami, Florida, and was the one to help find a location of the team’s base of operations in Malibu, California. Being a researcher and biologist at heart, she’s very knowledgeable about the surrounding environments and wildlife of the team on their missions, which can help give them an edge. Aquamarine is also an experienced S.C.U.B.A. diver and artist, though she's quick to hide her artwork for fear that they would get laughed at, despite the fact that most of the Vixens think her art is quite neat.

Aquamarine in the library, by WhitMaverick
Her combat skills are virtually non-existent, but taking on the role of international spy has given her the chance to be trained in defending herself (Onyx and a couple of F.U.T.U.R.E.’s combat trainers have noticed that she seems to learn the styles of Tai Chi Quan rather easily). She has admirable skill using a crossbow, but she admits she's never used one on a living target before. She looks up to Sapphire as her inspiration, seeing her leader as strong and talented. Onyx and Amethyst are her best friends (although they just met) and she sees Onyx as a mother figure that she never had, since she herself grew up without a mother.

A rather odd fur coloration, but only fitting for her name; a silver fox with a fur coloration that’s so lightly colored that it has a unique “sky blue” tone to it. The part of her fur that would normally be white is still there, but no black or red markings. Her eyes are a light bluish, almost aquamarine, color as well. She also wears stylish glasses that won’t hinder her looks. For clothing, she's a bit more modest than most of the girls, though not afraid to wear something like a small t-shirt or tank top. You’ll usually find her in a jacket with rolled up sleeves and jeans.