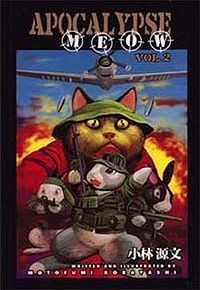 Apocalypse Meow is an anthropomorphic manga by Kobayashi Motofumi about the Vietnam War. (The original Japanese title was Cat Shit One.) Similar to Maus, each nationality is represented as a different species. The Americans are rabbits, the Vietnamese are cats, the French are pigs, the Chinese are pandas, the Japanese are monkeys and gorillas, the Russians are bears, the Koreans are dogs, the British are rats, and the Australians are kangaroos and koalas.

The depiction of Americans as rabbits is a pun on the Japanese word for rabbit, "usagi". USA + G.I. = USAGI.