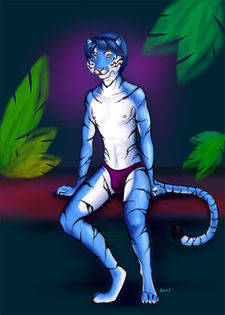 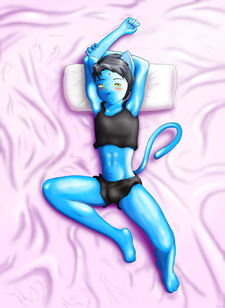 He lives in Omaha, Nebraska. He’s a skilled artist capable of anything from cartoons to realism.   In 2003 he joined the fandom via an online oekaki drawing board, where he then discovered VCL and DeviantArt, the popular furry art site FurAffinity followed later in 2006.

He is part of a local furry group in Omaha called Furbraska where he met Snap E. Tiger, founder of ByCats4Cats, who was featured on Animal Imitators in August of 2003.   His fursona originally started out as a blue domesticated house cat, but in 2005 that all changed when he discovered his love for tigers in a small novelty shop in a mall. Since then the tiger has been his fursona and his favorite animal.

Aoki does not own a fursuit, but hopes to in the future. Alternatively he subtly displays his fursona in wearing articles of blue and tigers.   In 2011, Aoki moved to So-Cal and attended The Prancing Skiltaire and Griffin Park meets. He also attended the 2012 Fur-b-que.  Late 2012 he relocated back to Omaha, Nebraska.   January 2013, Aoki attended Further Confusion. Since then he has continued to be involved with Nebraska furries and Furbraska. His most recent con attendance was Rocky Mountain Fur Con 2016.

Aoki's fursona is a blue Bengal tiger. A couple of distinct markings he possesses are a small dot in the middle of his forehead and under his lower left eye.

In the past Aoki started as a blue furred golden eyed domesticated house cat. It was not until a year ago after purchasing a tiger statue in a mall that he embraced his true fursona as a blue tiger. Falling in love with them, he had no doubts as to what his fursona form was.