A Coyote's in the House

From WikiFur, the furry encyclopedia.
(Redirected from Antwan)
Jump to: navigation, search
Culture > Publications > Novels > A Coyote's in the House 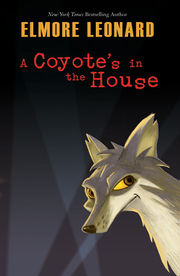 A Coyote's in the House involves a hip coyote, and an aging movie-star dog who wants to trade places with him. The novel features references to an earlier novel by Leonard, Get Shorty, specifically to Harry Zimm and his production studio.

A 2004 review in The Independent describes how the coyote main character,