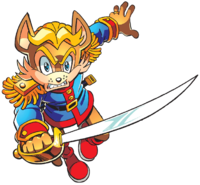 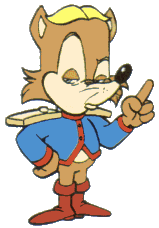 Antoine D'Coolette is one of the main characters in the Sonic the Hedgehog comics and television series. Antoine is an anthropomorphic coyote with a strong French accent. He is a member of the Freedom Fighters fighting against Dr. Robotnik. Antoine always dreamed of growing up to be just like his father, who was the general of King Acorn's forces. Although once a coward, his love for Bunnie has given him the confidence to fight and stand up for his beliefs. Antoine is an excellent swordsman and sometimes demonstrates his skills to the younger Freedom Fighters. He also serves as an airplane pilot from time to time. Antoine is said to be the world's greatest lover on Mobius, we have never seen this superpower in action.

In the Saturday morning cartoon version of Sonic in the early 1990s, he referred to himself as Antoine Depardieu, however, the family name used in the much-longer-lasting comic series is the one that has stuck, and the other is waved off as one of many discrepancies early on between the comic and the series, most of which were corrected in the series.