Anthropomorphic taxidermy is the practice of taking the dead body of an animal, preserved through the art of taxidermy, and displaying it in such a way as to endow it with human characteristics. For example, a preserved specimen may be dressed in appropriately-scaled human clothing and placed in a furnished tableau.

One of the earliest practitioners of anthropomorphic taxidermy was Herman(n) Ploucquet [1], taxidermist at the Royal Museum in Stuttgart, Wurttemberg, Germany, where he preserved specimens for the Natural History section. In 1850 he exhibited a scene of anthropomorphic animals in Leipzig.

Ploucquet's work became famous when he was one of fourteen taxidermists to display examples of their work at the Great Exhibition of 1851. His anthropomorphic displays were immensely popular with the public, and Queen Victoria described them in her diaries as "really marvellous". His scenes included a declaration of love between two weasels, a dormouse duel, hedgehogs ice-skating, and six kitten serenading a piglet underneath her window. His most popular work, however, was a series of six tableaux illustrating the German fable Reinecke the Fox based on Wilhelm von Kaulbach's illustrated work of Goethe's tale.

Daguerreotype photographs of the displays were taken by Antoine Jean Francois Claudet, and these were used to create engravings for a tie-in book The Comical Creatures of Wurtemburg. Much of the accompanying text was written by publisher David Bogue of London, inventing storylines to fit around the illustrations. The exception to this was the pre-existing tale The Story of Reynard the Fox, which Ploucquet depicting in a series of six tableux created with fox cubs.

Hermann Ploucquet's work is generally believed to have been an inspiration for Walter Potter[2][3] (2 July 1835 - 21 May 1918), of Bramber, Sussex, UK. Potter would only have been sixteen years old at the time of the Great Exhibition - and there is no evidence that he attended it - but Ploucquet's book, as well as various imitations of his work, were widely distributed at the time.

In around 1854, Potter began creating the mounts for an elaborate, large-scale tableau using preserved animals to depict the nursery rhyme Who Killed Cock Robin?. This display, entitled The Original Death & Burial of Cock Robin, was completed in 1861, and incorporated specimens of 98 British bird species. It was placed on display in the White Lion Inn which was owned by his father.

Potter built up his taxidermy business, moving into larger quarters next to the White Lion in 1866, and later (1880) setting up the Bamber Museum in which to display his scenes. Other anthropomorphic tableaux that he created included:

Potter suffered a stroke in 1914 and never fully recovered, passing away in 1918. His collection was kept by his daughter, Minnie Collins, who eventually sold it. The collection changed hands and moved around England several times before being broken up into separate lots when it was auctioned off in 2003. 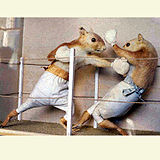 Other taxidermists from the Victorian and Edwardian periods who created works of anthropomorphic taxidermy include:

In 1996, controversial artist Maurizio Catalan created Bidibidobidiboo. This sculpture features a stuffed squirrel in a kitchen setting, seated at and slumped over a yellow formica table, apparently having just shot itself with a pistol.[6]

Museums dedicated to anthropomorphic taxidermy include:

Sam Sanfilippo's Albino Squirrels are on display in the basement of his funeral home in Madison, Wisconsin mainly to entertain mourners at funerals. Some of his dioramas are mechanised - squirrels rock back and forth in chairs - but most just seem to be having a good time on bucking broncos or watching half-naked chipmunks at the Topless Girlie Show. Sam has a particularly fine collection of white squirrels, which hail from Marionville, Missouri, a town which proclaims itself to be the white squirrel capital of the world.