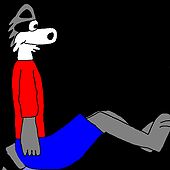 Bob Nelson (born February 2, 1962) is a furry from Massachusetts who has created several websites devoted to clean macrophilia and microphilia. His characters are Anthrocoon and Mike Rowe Fox. In addition, he created stories about a world named Wodlen populated by 70-foot-tall raccoons, foxes, and so on; two Earth astronauts land on the planet and are befriended by the likes of raccoon Arkody and fox Ungorp. Nelson has been a disk jockey at WMWM in Salem, Massachusetts since 1981 and has done live call-in reports from Anthrocon, Anthro New England, and Furpocalypse.

He has led panels on Classic Cartoons, Zootopia, and Greymuzzles at Furpocalypse, Anthrocon, Furrydelphia, Anthro New England, and Saturday Morning Contoons and has recorded convention panels on audio and video.

Anthrocoon is a 100-foot tall, or macro, anthro raccoon. Originally known back in the mid-1990s as "Rac Cooney", his new name is a pun based on the furry convention AnthroCon, which Bob has attended every year.

Anthrocoon comes from a planet where furries reign and are all roughly that size. He came to Earth in a space warp while trying to develop a teleportation device. He is a kind sort who usually dresses in a red T-shirt and shorts.

Mike Rowe Fox is a four-inch-tall, or micro, anthro red fox. He was a resident of Lilliput who later wound up in the "normal sized" world when developers turned Lilliput into a resort for average-sized furs, causing him to flee the island.