AnthroExpo (also known as AnEx) is a hotel-based furry convention that takes place at the Sheraton Oklahoma City Downtown in Oklahoma City, Oklahoma.

The aim of AnthroExpo is to provide a welcoming place for fandoms in Oklahoma and regionally, to promote dealers and artists alike, and to bring about a renewed sense of community for furries.

From thier official Website's Mission & Goals Page[1] Our Way is a socially constructive goal to make change happen for the better, with high regard for respect, transparency, and the common welfare. It’s our mission to always endorse the good that members of this rapidly growing community have to offer. OWO is not just a company that operates a convention, and none of us work for a profit. Our team strives to innovate, educate, and inspire the furry fandom and beyond with positive leadership. We wouldn’t do it any other way.

Oklahoma is at the heart of the nation. Furthermore, this is our home and we’d like to give back to it as much as it’s given to us. Our state boasts a rich culture and a pioneering spirit that has made many of our company founders and staff into the outstanding people they are today. “It’s an Oklahoma thing,” a standard of courtesy and respect that makes us stronger together. There’s a vibrant local furry community here that we want to give a home to through meets, conventions, and charity work. Recreationally, Oklahoma City has experienced much growth and expansion over the last decade, and it’s about time we followed in (fur)suit.

AnthroExpo began their Kickstarter on November 9th, 2018, with an all-or-nothing goal of $2500. It has since completed its goal, earning a total of $8401.

AnthroExpo previously supported Wildcare, a non-profit organization dedicated to the rehabilitation of wildlife Noble, Oklahoma, as the convention's official charity partner for 2019-2020.

On June 9th, 2019, they held their first official fundraising effort for WildCare - a "Charity Auction Picnic" At Mitch Park in Edmond, OK. The event welcomed roughly 40 visitors and raised $750 over four hours.[5]

In June 2020, AnthroExpo staff hosted a virtual charity drive over Twitch to raise money for the NAACP Empowerment programs. It was announced on June 26th that their streams raised a total of $2,260 for this cause.[6]

In April 2021, AnthroExpo hosted an Online "Virtual" convention via multiple platforms to raise money for the Asian Mental Health Collective. The total raised from this event from April 10th to 11th was $1,500.

In January 2023, AnthroExpo's charity partner was Pivot, helping youth by providing temporary housing, food & more[9] (2SLGBT+ friendly & gender affirming).[10] The total raised from the convention from January 27th to 29th for Pivot was $14,135.

The official mascots for AnthroExpo are Andrea the scissortail flycatcher, which is also the state bird of Oklahoma, and Exavier the prairie dog. They are featured on official artwork, including the website, and eventual merchandise.

Staff for AnthroExpo can be viewed on the Convention Website linked here. 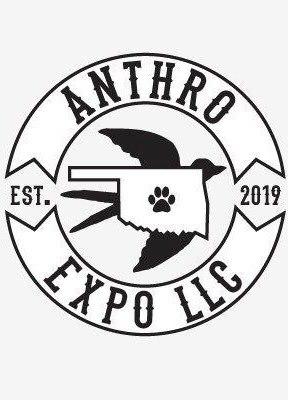 AnthroExpo's initial logo indicating a proposed 2019 event. The LLC was itself was mentioned in the 2018 Kickstarter.

On Tuesday, December 4th, 2018 the convention announced their official dates and venue location while simultaneously opening pre-registration through their website. AnthroExpo at this time was scheduled to be held on October 18-20th, 2019 at the Wyndham Hotel in Oklahoma City, OK.[9]

On January 30th, 2019 the convention announced that they would be postponing their originally planned convention dates from 2019 to 2020. Of the factors behind this decision, one included the forced removal of an unnamed major organizer and backer for the con, who was quickly ousted from staff due to probable misconduct involving minors. The second was the announcement of a second hotel-based convention in Oklahoma, who had recently proposed their dates to be two months ahead of AnthroExpo's scheduled debut. [11]

On March 11th, 2019, the new dates for the convention were announced for January 31st - February 2nd, 2020. The convention was set to take place at the Wyndham Hotel, which was said to be undergoing large-scale renovations at the time.

On New Years' Eve of 2019, convention chairs were made aware that their hotel venue would not be open during the con dates due to incomplete renovations. Their hotel contract and booking list were transferred to the Sheraton Oklahoma City Downtown.

On January 2nd, 2020, the convention announced that AnthroExpo's venue had changed to the Sheraton Downtown Oklahoma City near Bricktown.

After months-long discussion with the venue and a formal vote by its Board of Directors, the convention announced on October 9th, 2020 that it would postpone its second iteration from 2021, announcing its new dates for January 21st - 23rd, 2022. [13]

It was formally revealed in January of 2021 that AnthroExpo would host a Virtual Convention. AnEx Online: Shipwrecked! was marked for the weekend of April 10 & 11, 2021. [14]

AnthroExpo announced the opening of their Hotel Block for their hotel after the virtual convention concluded. [15]

The convention announced the opening of Pre-Registration for their 2022 convention on May 7th, 2021. [16]

AnthroExpo returned to being an in-person convention themed as "CasinOwO Royale."

It was revealed that the theme for 2023 would be "Furry Scene," themed after 2000s scene and emo culture. The 2023 edition concluded with 896 attendees, claiming the spot for the most-attended furry convention in Oklahoma.

At the conclusion of the convention, it was revealed that the 2024 theme would be "8-bit Heroes" and that the venue would be moved to the Embassy Suites in Norman, Oklahoma.