From WikiFur, the furry encyclopedia.
(Redirected from AnthroCon 2005)
Jump to: navigation, search

Anthrocon 2005 was held July 7-10 at the Wyndham (now Sheraton) Philadelphia, a hotel in the heart of Philadelphia, Pennsylvania.

The convention's theme was "Heroes". It was a nod to police officers, firemen, EMTs, and all kinds of everyday people who did something to become heroes in others' eyes. Among planned events were the Dealers' Room and Artists' Alley, gaming room, and especially Uncle Kage's Story Hour. 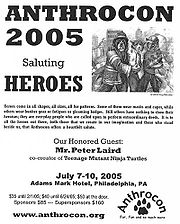 A rare Anthrocon 2005 flyer, listing the venue as the Adams Mark Hotel

Following the demolition announcement of the Adam's Mark hotel to occur in the first quarter of 2005, the Anthrocon staff scrambled to find an alternate venue to hold the convention for their 2005 program. Dozens of hotels and convention centers offered to be the new location of the convention, but the Wyndham hotel was the closest and cheapest available location. After a long duration, the official announcement was made that the Wyndham Philadelphia would serve as their venue for 2005. As it was explained shortly thereafter, the hotel would be their venue only for 2005 as they were looking into a new permanent home for the convention. This would later turn out to be in Pittsburgh. To date, the Wyndham is the only hotel Anthrocon has used for only one year.

The fursuit parade on the last day of Anthrocon 2005

Due to space limitations the internet room was set up in the second floor of the lobby, and the convention could not offer The Zoo to the attendees (the large main lobby more than made up for it). They could not hold as many artists and dealers selling their services and products as the previous year. Despite the space limitations and a slight decrease in attendance (this is the only Anthrocon to date that experienced a dip in attendance), the convention proved to be a success.

Source: Anthrocon, Inc. Form 990 (description) from GuideStar.com
Note: These financials provide just a brief overview, and should be considered in context. Each convention has its own situation, which may change from year to year. Special events (like art shows) that are part of a charity's mission are usually run at a loss. Conventions typically have many other expenses which may come to far more than those listed. Check the source for further details.