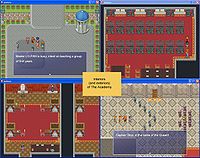 Concept: Anthem is a computer role-playing game inspired by old Super Nintendo Entertainment System RPG's and is being built using the RPG Maker XP engine. Currently it is in its prototype phase, once completed it will enter production stage and be re-created under a new system in order to support multiple platforms.

Plot Overview: A futuristic race of furries does battle with a group of rebels and a group of dominionists from the past. They are helped by two humans from a rebellion group centuries before who have also traveled through time and are the last of their race. The futuristic race of furries, or 'promethean' mutants, depend on a computer built by a centuries old genius that is instrumental in the operation of the government. Unfortunately this computer has been damaged and is slowly being corrupted, with no one able to fix it.

Themes: The game's essential plot focuses on the struggle of the individual against collectives, reason versus superstition, and other values. Unlike other games of its kind, there is no magic in the game, but rather special techniques that can be unleashed as part of a character's class (Martial Arts techniques, for example), or using technology developed from "Precursor" (Human) artefacts and technology.

Creators: Anthem is being designed by Maus Merryjest who also provides custom art, the music is being written by Fox Amoore, and the programming is being completed by Asher Wolfstein.

Trivia: Within the game, there is an hommage to Final Fantasy VI's famous opera "The Dream", and in particular to Celes' aria ('Aia Di Mezzo Carattere'), consisting of an actual operatic performance of an aria written by Fox Amoore and performed by Maus Merryjest.