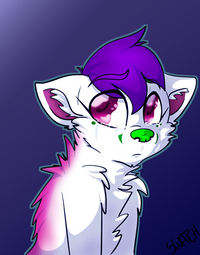 Swatch, as drawn by herself.

Swatch (also known as anotheredgydog) is a fursuiter and furry artist who lives in Orlando, Florida, USA.[1] She is in a relationship with Ozzy Callooh.[1]

Swatch is an admin of the UCF Furs group, and maintains their Twitter account. She takes commissions for both traditional and digital art, including Telegram stickers.[2]

Swatch's fursona is a female fox dog[3] with primarily white fur, except for a large magenta stripe on her back and some small green markings on her face. Her eyes are magenta, her nose is bright green and her hair is a dark purple.[4] She was created as an attempt to make "the most generic dog thing ever."[5]

Her fursuit was made by The Fur Collective.[3]