Annie is a Chilean webcomic in Spanish, in which the main character is a little pink furry creature that wants to take over the world. The webcomic focuses itself mainly in criticizing subjects relative to the human system of life, Chilean policy or topics related to computer science.

Annie is a little pink furry creature that wants to take over the world to fix it. However Annie does normally not succeed at this, because of her own stupidity and because her master (The_Boy) treats her like a pet. Nevertheless, she has lots of friends in all walks of life.

In addition to social commentary and computer science themes, Annie strips are sometimes informative in nature; for example, defining vorarephilia to readers.[citation needed]

She hates Santa Claus and consumption, after discovering Santa sold himself to the big corporations.

She thinks very critically of Chilean politics and ideology.[clarify] Nothing is known about her theological belief yet. She lives somewhere with The_Boy in Santiago, Chile, although she maintains a hate/love relationship with him, overall disliking his odd habit of treating her like a mascot. In addition, she handles a powerful organization without profit aims, that host web sites.

She loves nature and hard music. Her favorite food are living Eevees. 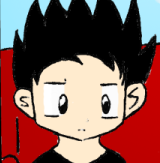 This young male adult lives in a house in Santiago with Annie. He cares about her, he maintains her and he worries about her as anyone would be worried... about his pet. He is the typical Chilean stereotype: Doesn't worry so much about his environment, only takes what the TV offers, and when he states his opinion, it's normally about something he doesn't know about. He does not have much preoccupation about his own safety. 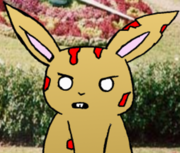 Randy is a small, skinned rabbit. He's full of hate to all female TV models, and his objective is to recover his fur, used by one of them to create a fur coat. Although he is full of hate, he has a very philosophical way of thinking, he's Christian, he thinks Jesus rocks and tries to be like him (until he sees female models again).

Sekori is a little Eevee. Originally Annie bought it to eat it, but for various reasons this creature became one of Annie's closest friends, and lives with her.

For creating this strip, there are a lot of influences from the acid jokes of Juanelo (non-furry Chilean comic) to VG Cats. The author uses many sources for creating strips from a simple discussion in a forum to something said on TV or radio. Recurrent are computer jokes.

Using Eevee as food is used as a way to make fun of the many Eevee fanatics and to create some impact onto the fandom.