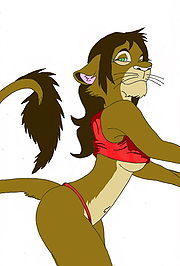 Anisa Lioness (born around 1994) is a female furry artist from Trinidad and Tobago. She has been part of the fandom since the latter part of 2008, when she started drawing fur art. She is also a college student and has started back in 2005, she will be graduating in 2010. Her interest in furry art started in early October 2008 and it is now currently her favorite kind of art.

Anisa's character is a female demonic lion. Her fur and hair is mostly dark brown, with a lighter brown colour down her torso and complete green eyes, darker brown strips down her back, moving onto her tail and going up her arms and legs. She has been seen as being anthropomorphic and feral. Most of her earlier artwork is feral, but she now draws her fursona mostly anthropamorphic. She is quite well known for many reasons.

Anisa also has another fursona which is a male demon wolf named Andrew. He is black with red markings on his torso, dark brown hair and a flame on his tail. She has just recently been experimenting with this new fursona of her's but her most popular character will have to be her lioness.

Anisa's artwork is comparable in style to Lion King characters. Although she draws mostly anthropamorphic characters these days, she prefers to draw some of her characters feral. Anisa does draw some adult furry art.