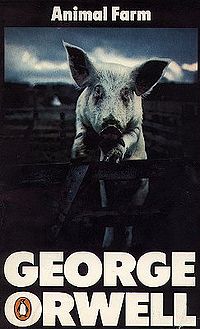 Animal Farm: A Fairy Story is a novel written by George Orwell, first published by Secker and Warburg in August 1945. It could be considered one of the first 'furry' novels, although the use of animal characters was largely a use of metaphor.

In the novel, a group of animals, tired of abuse by their human owners, revolt. Although their philosophy of 'Animalism' is popular, few of the animals are able to understand its concepts fully, and the pigs exploit this, becoming the de-facto ruling class and exploiting the difference in species to keep the animals miseducated. For example, instead of teaching the animals what the precepts of Animalism are, they paint them on a wall and try to teach the animals how to read, a skill that only the pigs learned. Later, they claimed 'weakness' and 'special needs' in order to claim more and more special abilities. Finally, the animals cannot tell the difference between pig and human, and the precepts of animalism have been reduced to a single phrase: 'All animals are equal, but some animals are more equal than others.'

The Animalism precept 'All animals are equal' is referenced in the title to the furry supplement to Gamma World, All Animals Are Equal.

The book has been turned into a movie twice: an animated movie in 1955, and a live-action movie in 1999.

The furry Snowball took his name from the character of the same name in the book.

The characters that populate Animal Farm are those that you would expect on any farm; pigs, horses, chickens, dogs and so on. It is particularly interesting how Orwell has humanised the animals. His humanisation of animals is a peculiar mix of a realistic approach and the need to suspend belief.

As far as language goes, initially the animals communicate in their own 'animal language' and learn later to speak and read the human language through exposure to books they find. Taking into account the varying brain size of the animals, some animals are more adept at learning the human language than others. For example, the pigs become quite literate whereas the sheep and chickens learn very little. Interestingly, there is very little actual dialogue written word for word. For example, instead of writing "I'm going to get some food," Orwell might write "He told everyone that he was going to gather some food." Whenever actual written dialogue is present, it is usually an important speech being made.

When it comes to the physical capabilities of the animals, some suspension of belief is required. The pigs learn to write, and make do without hands by curling the knuckles of their hoofs around a pen or brush. In reality it is unlikely a pig could actually grasp a writing tool well enough in this manner to write, but we readily accept this.

Finally, whereas the world of the humans and animals is a separate one in most stories involving animals and humans, in Animal Farm the humans eventually act as though the animals were humans. The Animal Farm becomes a common topic of conversation, there are some business deals with the humans and in general the people appear to regard the animals as humans.

Two films based on the George Orwell have been made. One was an animated film, which stuck fairly close to the original story, but added a more family friendly ending by tacking on an epilogue where the animals take their chances and revolt against the pigs. The other film was a live action film made with live animals. This film took far more liberties with the source material.