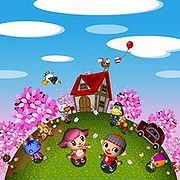 Animal Crossing is a series of simulation games about being a human living in a town (or island, in the newest entry) of anthropomorphic (furry) animals and performing chores to earn money and pay off a debt, while making friends and learning along the way.