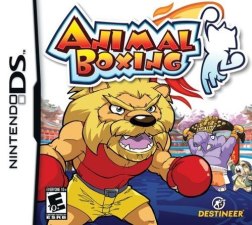 Animal Boxing is a video game for the Nintendo DS and on DSiWare. The game involves boxing with over 50 various animals by using the touchscreen; the game is played with the DS held upside down so that the touch screen is above.[1] Animal Boxing includes "animals to choose (around 50), from arctic wildlife to farm animals, each with their own stats. [...] Each animal has been anthropomorphized to fit into boxing trunks and a pair of gloves."[2] In single-player mode, the player's character is a customizable male or female human. In multiplayer mode, which can be played with others using Nintendo Wi-Fi Connection, the player chooses a human or an animal character.[2]

Animal Boxing, developed by Gammick Entertainment and published by Destineer, was released for the Nintendo DS on December 2, 2008 in North America,[3] then December 30, 2009 in Europe. It was released for DSiWare on January 17, 2011.