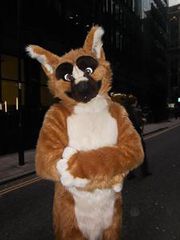 Ani's fursona is a Boxer dog. His fursuit was constructed by iSqueakyPinky.[2]

Ani is involved professionally with the entertainment industry, and has DJed at EuroFurence, ConFuzzled and at the LondonFurs parties. In September 2011, Ani joined the LondonFurs organising committee.[3]