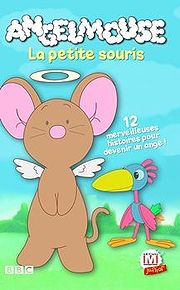 Angelmouse is a children's television programme which is produced by Silver Fox Films and broadcasted by the BBC. It is aired on CBeebies (both the separate channel and CBeebies on BBC One and BBC Two)

Angelmouse and friends were created by Rodney Peppe.

Angelmouse is an angelic little mouse, with wings and a halo (aka "Thingamajig"). He's been despatched to Earth to help those in need and to carry out good deeds in order to become a fully-fledged angel.

Unfortunately, poor Angelmouse isn't very good at his job, and things regularly go wrong for him. Whenever a good deed backfires, Angelmouse's halo (aka "Thingamajig") wobbles, dims or vanishes altogether and our poor hero is left tearful and frustrated. But the twists and turns of each tale soon set him back to rights and his friends and associates are invariably left with a broad happy smile on their face...