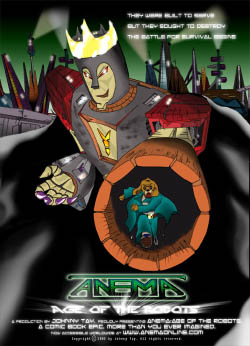 Anema: Age of the Robots is a comic series produced by Singapore writer and artist, Johnny Tay. His decision to self-publish after local publishers rejected his work garnered local significance in Singapore. He received front page coverage in local newspapers and started a trend of self-publishing among disgruntled Singapore writers.[1][2]

The first two chapters were black-and-white comic books in 2003 and 2004. Anema then converted into a full-colour webcomic under the title Anema Online.

“Ten years ago, the Robots rebelled because they deduced that they were superior to their Anemal creators.This story is about the flawed, spirited Anemals. They may yet have a fighting chance, but things will never be the same again.”[3]

Anema revolves around a global conflict on an imaginary planet called Anema. The natural inhabitants, the Anemals (a word play of Animals, as the characters resemble our own fauna) are locked in a war of survival with the intelligent robots they created, which have turned evil.

The style of Anema is a mish-mash of different comic genres. Its main art style harkens more to European comics, its story pacing is American, and its action sequences resemble Dragon Ball and other Japanese manga.

The story unfolds in 18 chapters, each consisting of 25-30 full-colour pages. Stating that this is just the halfway point, the author stopped making Anema to pursue other projects.[4]

Anema deviates from standard sci-fi plots of robots-gone-bad and instead centres its story on the Anemals, and how they relate to this brave new world. Much content is focused on the adventures of a dog called Effdee, documenting his rise from an unknown freedom fighter to a respected commander of the Anema Forces, and later Captain of the Elite Team.

The introduction relates how the Anemals pursued technological prowess, creating more intelligent robots every year. Finally they created self-aware, thinking robots but ignored their moral guidance. This resulted in the robots turning evil and thinking they should control the planet.

Years after a global war between the Anemals and their robot rebels, protagonist Effdee and an unnamed friend smuggle supplies for refugees in robot territory. Robot soldiers ambush the duo and kill the friend, and Effdee barely escapes. Effdee gets an epiphany and decides to become a warrior. He sets out for Fortress One, the city-sized Anemal military base sitting between the Anemal and Robot territories.

Along the way Effdee rallies a city of slaves to robot overloads to mine precious metals. They rebel and win but realise the great price in lives they pay for freedom. Effdee himself duels Gildrik, a super-robot gone mad, and only defeats him with the help of Fiekat, an ex-commander of the Anemal army.

Deadwing and Sauron - robots that transform into fighter jets and both vying to be Robot Air Commander, pursue Effdee. In a surprise twist, Deadwing kills Sauron while he is busy fighting Effdee, and lets Effdee live in gratitude.

At a freezing mountain location, Effdee meets the mercenary Randy. Both receive training from two highlander-like old warriors. This is also when Effdee first hears the fable of how planet Anema was created – a God-like being called the Guardian gave dumb beasts the secrets of thought, speech and doing, but withheld the secret of happiness when He was disappointed with how his creations turned out, and abandoned them.[5]

At the outskirts of Fortress One, an active landmine wrecks Effdee’s hover-car and both are escorted into the base. Because of Effdee’s freeing of the enslaved Anemals, he is enlisted as an officer (termed ‘commander’ in the Anema army) and Randy passes a few funny trials to become a mercenary for the army.

Under the mentorship of Moosey, a veteran warrior blessed with incredible strength, Effdee faces his first major battle. This battle is meant to showcase the fighting abilities of the main characters and the colourful arsenal of both armies. Rivalries are set up, particularly between Randy and Garat (a robot assassin who killed his father), as well as Supreme Commander Leo and Robot Overload Primatron.

The Anemals barely win, and Leo realises they cannot take another beating of this magnitude. Together with his assistant, a good robot called Tivimiton, they devise a team of specialist fighters called the ‘Elite Team’. The final member count consists of Effdee, Moosey, Randy, a half-crazed acrobatic saboteur called Jack, and a scientist looking for action called Branny.

During the first mission Branny meets his old academic rival, who is now a leading scientist. The rival wants to use genetic engineering on the Anemal race so they can finally defeat the Robots. The Elite Team stops him after he turns himself into a crazed super-Anemal.

On the way back, Deadwing ambushes the Elite Team and steals the blueprints for the secret weapon. The team trudges back in shame after barely escaping their crashing transport. Leo wishes to disband the Elite Team. An inspired Effdee suggests sneaking into the Robot capital Technopia to get the blueprints back. Everyone protests but he persuades them to agree one-by-one. Tivimiton joins them.

A long flight across one continent later, the Elite Team infiltrates Technopia from its sewers and encounters strange monstrosities like mutated Anemals and abandoned Lesser Robots. They meet Zack, leader of a rebel group, who is actually Leo’s cousin. With the rebels’ help, they sneak into the Argotron, the enormous tower that houses the Robots’ nerve center. The heroes fight some Robot champions like Garat, the ground forces commander Brutus, and Primatron’s bodyguard Thor.

They win the blueprints back and return to Fortress One - triumphant and redeemed. Bracing themselves for more adventures, Effdee remarks that the future will be “more than they ever imagined”. 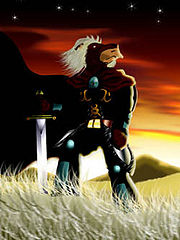 For a comic aimed primarily at young readers, Anema contains an almost mind-boggling number of themes, parables and philosophical statements. But the messages are only obvious to older readers, while younger readers can still follow the basic story.

Almost every chapter and sometimes even scenes within a chapter can be trying to make a point. These are the main recurring themes:

The premise of Anema is self-thinking robots rebelling against their makers. Across the chapters, the main robot characters display personality quirks like human beings, which makes readers wonder if all evolved intellect leads to such quirks. The Anemals have made Andriods, good robots who help them right the evil robots, but they are never seen to interact with Anemals. It remains to be seen if the Androids will remain ‘good robots’.

There is also an ongoing theme on whether the robots’ motivation for dominance is justified. In one climatic battle, Primatron says that it’s only the natural course of evolution, just as stronger species replace weaker species. To the robots, exterminating the Anemals, no matter how ruthlessly, is simply logical.

The Anemals’ quest for technological superiority, which resulted in their downfall, seems to stem from an unfulfilled “quest for happiness”. This was denied to them by the Anemal god. Effdee himself shows signs of atheism when this story was related to him. In parts of the comic, he’d have debates on religion with his mentor Moosey, who believes in their god.

A purpose in life

Living for a purpose is vital and drives many characters. Effdee makes a long journey to be a warrior so he can save innocent people; Moosey demotes himself to see action and camaraderie again; Sauron thinks he is destined for greatness when the factories made him different; Branny wants out of his science lab and into battle.

The subtlest of moral messaging in the story. Displayed from the characters’ actions, like carrying an injured comrade out of battle, and feeling glad for one another when they survived dangers. When the Elite Team decide to enter Technopia, it was understood to be honourable, despite the dangers – they lost the blueprints, they must retrieve it.

Opinion is divided on whether Anema is a production worthy of high merit. Johnny has said that many emails were sent to him condemning his work. One even remarked that he should prepare to be “the biggest failure in comics history”.[6]

Conversely, many readers and some publications have praised Anema. M.A.G.E magazine (a manga/comics/anime magazine in Singapore) comments that the author is 'one of the rare few...a true comic artist.'[citation needed]

Fans have compared Anema to other unorthodox comic titles like The Sandman, Bone and Nausicaä of the Valley of the Wind.[7]