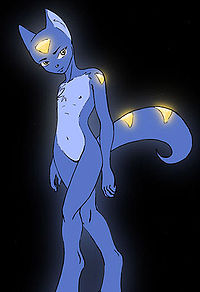 Chakats are hermaphroditic, a type of androgyny

An androgynous person can be called an androgyne.

Androgynes are a gender in the space-themed MUCK Furscape. They are described as a recom variant in which the sexual organs have been left out, and the recom itself having no sex drive. This gives the recom more energy to use on other tasks, and a more effective immune system, while also allowing them to be equally friendly with people of any sex.