This page is about the cartoon character. For the fursuited TV character, see The Drew Carey Show 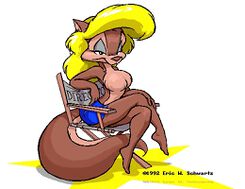 Amy the Squirrel, or just Amy Squirrel, is a cartoon squirrel character created by artist and animator Eric W. Schwartz, and one of the handful of the furry fandom's better known characters.

Amy the Squirrel was featured in a number of Schwartz's early Amiga animations and became the unofficial mascot of the Amiga community. Most of Eric's animations were produced with Movie Setter, an Amiga app not unlike Flash, but meant for stand-alone disk content. XAnim and other players can play these files, so Eric's animations can still be viewed on MacOS, OS/2, Linux, and Windows machines.

Amy enjoyed her initial popularity when several of Eric's animations were featured on Fred Fish disks - CD collections of hot shareware and freeware for the Amiga sold mail-order and traded at user groups - and multiple times in a Commodore-centric magazine.[clarify]

Amy predates most of Schwartz's other characters, including Sabrina the Skunk.

In the webcomic Sabrina Online, Amy was Sabrina's roommate, and is married to a wolf named Thomas Woolfe, which she has a son with, Timothy ("Timmy"). After leaving Sabrina's place to leave with her family, Amy is now a bartender.

Amy has changed a bit over the years; in the early years (the late 1980s to the mid-1990s), Amy was almost always drawn topless (though in a playful way), wearing nothing but a very short blue skirt. She was portrayed as mostly playful and mischievous.

Since the mid-90s, Amy is drawn fully clothed and portrayed as much more modest and mature. This is due probably in part due to her getting married and having a child in Sabrina Online.

One of Amy's best animations is Amy the Squirrel's ''A Walk in the Park''. Others include The History of Amy The Squirrel and At the Movies 3 (1997).