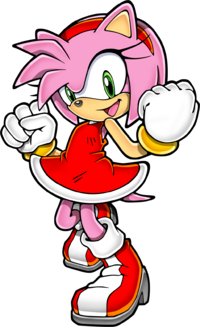 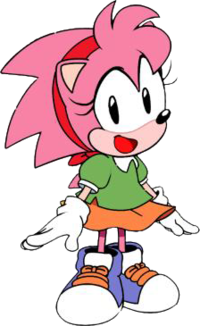 Amy Rose, previously known as Rosy the Rascal, is a pink hedgehog from the Sonic the Hedgehog video games released by Sega. She has chased Sonic for over a decade and has been trying to gain his heart in everything from animated TV shows to comics and games. Like Sonic and Tails, she has her own sidekick, Cream the Rabbit

Amy first appeared in the Sonic the Hedgehog CD published in 1993, as the girlfriend of Sonic, in a design very similar to Nintendo's Princess Peach. After that appearance, Sega took the character, and Kazayuki Hoshino redesigned her for Sonic CD in 1993.

In her first game appearance, Sonic CD (1993), Amy was introduced and kidnapped by Metal Sonic, but was rescued when Sonic challenged him to a race to save her.

Amy is one of the main characters in Sonic X, an anime series which is the latest of the Sonic the Hedgehog cartoons. In Sonic X, Amy is Sonic's self proclaimed girlfriend, although her long-term goal is to get him to notice her. Despite his annoyance at her antics, Sonic's feelings are still unclear about her. In some translations, he has given her flowers to tell her he loves her. Amy also has her Piko Piko Hammer which she uses multiple times during Sonic X. The "Piko Piko Hammer" was used in "Cruise Blues" after Sonic tried to use Amy in order to get off the ship. The Piko Piko Hammer is however mainly used to attack Eggman's machines. 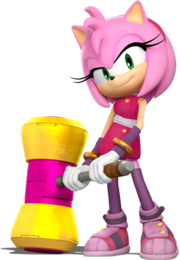 In the Archie Comics, Amy is the youngest member of the Freedom Fighters, and has a crush on Sonic that he tends to ignore. Amy is the cousin of Rob O' the Hedge (a thinly veiled homage to Robin Hood), who sends her to live with Sonic, where she falls head over heels for Sonic, but remains distant out of respect for Sally Acorn.

The love of Amy's life is Sonic the Hedgehog. Ever since Sonic rescued her in Sonic CD, she has fallen in love with him and been trying to win his heart. Only in the Sonic manga is it clear that she's succeeded in this, because it states she was his girlfriend. [1]

Cream has been Amy's sidekick practically every time they appear together. They first teamed up in Sonic Advance 3 as Team Jubilee and played a largely equivalent role to Sonic and Tails' Unbreakable Bond. This has been backed up by their friendship in Sonic X. They also seem be together in many other games, like Sonic Heroes, Sonic Battle, and Shadow the Hedgehog.

Miles Tails Prower (Tails) is known to be a younger brother figure towards Amy. They work good together and make a strong team. Tails normally enjoys Amy, except for when she's chasing Sonic.

Knuckles and Amy Rose tend to have a brother/sister relationship. The two don't always get along in the anime (Sonic X) but both Knuckles and Amy know when to stop fighting and work together.