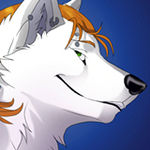 Amras is a furry currently living in the District of Columbia. He was formally introduced to the furry fandom in late 2004 by Mune Metsukai. Prior to meeting Mune in an IRC roleplaying channel Amras was unaware of the fandom.

Amras maintains that he and his "character" differ only in that one is a wolf and the other a human, but in all other aspects they are one and the same. For this reason he tends to avoid using neologisms like fursona when describing himself. His "character" is a digitigrade arctic wolf from Ireland, with red hair and green eyes. Standing at a confident 183cm, both Amras the person and Amras the character prefer to be on the football pitch or at the beach surfing. A master of sarcasm with a purportedly "evil" sense of humour, Amras is best described as an ordinary, laid back guy who enjoys nothing more than a good porter with friends.