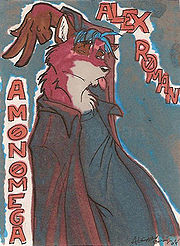 Amon in his predominantly-red fur coat.

AmonOmega (commonly, Amon) is a furry artist who currently lives in Atlanta, Georgia, USA. Formerly known as Ookami, Blazerwolf and other names. He graduated from the Art Institute of Atlanta with a Degree in Media Arts and Animation.

Amon's fursona is a wolf. Predominantly red in colour, he has a white winter coat as well.

Amon is an artist at heart, dabbles in all forms and his every waking moment is devoted to art. He loves to travel, and wishes to visit Europe and study the architecture. He idolizes Michelangelo.

He is very loyal to his mate, Cherushi, and is rarely seen without her at his side, as she is very protective and fairly violent if provoked. He loves her regardless, and is a wonderful husband. He is a fun-loving person, but has a very serious and sensual nature. He does not take to drama and will quickly put an end to unnecessary childish behaviour.

Amon is the main character in the comic "Better Than This". In the story, he travels to Vancouver, British Columbia to become an animator. While there, he shacks up in a bizarre apartment complex heavily populated with mischievous women, all of whom are immediately infatuated with him (in jest toward stereotypical love triangle scenarios in Japanese Anime such as Love Hina) and he must eventually choose between them.

The comic is adult in nature, and tends to delve into darker situations and personalities than typical cartoons, including a situation where Amon is classified as a player when he dates several of the women in his building at the same time. Of course, there are always repercussions for our actions, and he must learn this on his own.

The story is heavily influenced by real life experiences he had whilst studying at the Art Institute of Vancouver. 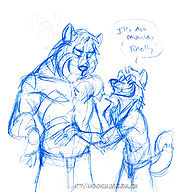 Blazer and his little brother, Amon.

Blazerwolf, otherwise known simply as "Blazer" in recent years, is the former persona and user name of AmonOmega. The name was created when the artist registered at popular website, FurNation back in approximately 1998. He worked under this name until approximately 2003-2004 when he decided to fully switch to AmonOmega.

Since the switch, Blazerwolf has now since become the fictitious half-wolf, half-tiger older brother to Amon and his family.

Currently there is a story in the works explaining their respective stories.