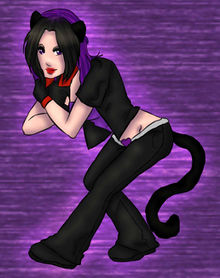 Picture of Ami Darkfield. A colored sketch (sketch by Stellary)

Ami's discovery of the fandom is unknown, as well as where she first found it. She is also not much of a furry but she supports the fandom just fine. Ami is more of a neko person.

Ami is a female living in Canada, who currently lives alone in a small basement suite. She currently has a fangirl crush on a Criminal Minds character, Spencer Reid but tries to keep calm and not crazy about it.

Her personality contains a bratty, stubborn, curiosity, playful and quick to laugh. She tries to act mature but at times childish. Loves to make friends and draw. Also she can not live without her precious music.

Ami enjoys playing games, drawing, listening to her music, roleplaying with her friends and hanging with them. She loves swimming and watching her favorite shows like Criminal Minds and Skyland.

Ami Darkfield being comforted by Spencer Reid. This is also an example of Ami's artwork.

Ami has been drawing since a young age, though around where she first started drawing it consisted more of stick people. As she got a bit older she tried drawing better with details. One piece she first drew at a young age was that of Ash Ketchum, from Pokemon, which she had done entirely in crayons. The piece was very nice and she even got praised on it. As she got older she didn't draw much until the age of 19 when she got into it again. She first started drawing on paper with pencil crayons. Taking pictures of them as a way to submit them online on sites. However, her artistic skill didn't grow much cause most of her art was the same and not well colored but thanks to helpful friends she has gotten better. After drawing on MS Paint and failing she almost wanted to quick drawing. Though later she got a tablet and using art programs like GIMP, Photoshop and Easy Paint Tool Sai, She has gotten much better.

Looking up tutorials and watching her friends draw on livestream, she kept on getting better. Ami has improved so much in her art over the past years and she keeps on getting better. She accepts constructive criticism, which later helps her improve. Her art is inspired drawing anime style but coloring with airbrush.

When Ami first created her persona in 2008, she was originally a Teen Titans OC named Moonfire. Youngest sister to Starfire and Blackfire. However, while roleplaying outside of Teen Titans area and after realizing Moonfire was more just like her but with changes to it, with the added powers, it was then realized that Moonfire was her persona. It took Ami ages before finding the right name but finally named her character Ami Moonfire Darkfield. She kept the Moonfire name cause she liked it but has it as her middle name. Ami has gone through many changes as a character, improving as to not seem like an immortal being. Her first outfit was based on Starfire's but different colors but got later changed. Got changed again into Ami wearing pants instead of a skirt making it easier for when shes kicking butt.

Ami is a panther neko who is 5' 5" and weighs 120 lbs. She has purple hair that is shoulder length, or just above the shoulders if you want to be more accurate, with black bangs she just dyes when needed. Being a panther neko, she has the features like one. As having a black panther tail, the ears and fangs as one. Even her purple eyes are like a panthers but don't look it as she doesn't have the catlike slits as pupils. Her nails are claws but also don't look it as she keeps them well sharpen. When she opens her mouth, panther fangs are shown, the rest look like teeth but are in fact fangs.

Her outfit consists of a nice black leather/jean jacket with a red collar. The sleeves are bunched up and folded, stitched that way, around the elbows. The length of the jacket just goes around the waist. She wears a purple mini t-shirt that shows her midriff. She wears black leather pants/jeans that are wide hear the bottom, pants are held up by a silver belt with a purple heart shaped belt buckle. She wears black leather boots that stop around her ankles, she wears red socks. On her hands she has black fingerless gloves with red cuffs on them, same colors that match the whole outfit. 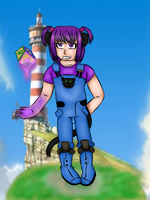 Little Ami dressed up in a Skyland style outfit.

Ami Darkfield is currentlty 22 years old. Don't let who she is fool you. Ami is a vampire because when she was a 10 years old, she got attacked by a vampire who bit her. However, this vampire failed. Ami only gained a trait of one like the thirst for blood. Though for Ami, blood is not a necessity, she can live without it but it doesn't stop her from trying to get some and attacking an innocent person. She is also a very loyal creature who will protect the ones she loves and cares about by all means, meaning she would kill anyone who messes with her or the ones she cares about. Despite her crazy nature, she is a friendly one and loves to make people laugh.

Her one downfall is, she has this evil side to her and this entity has her own body. This evil side is named Onyx, who is currently in a place that Ami likes to call the World of Darkness. Onyx is Ami's dark and evil side, also the evil thoughts Ami has. She loves to torment Ami on a daily basis or just when she wants too which drives Ami crazy. Though she also is capable of ignoring Onyx or just telling her to shut up.

Ami's powers include of a few things but with weaknesses too. She studies witchcraft and can do magic, saying that Ami is also a witch. She doesn't know a lot of magic and uses little magic every know and then. She can also control darkness and fire, which is not easy. With her Darkness power it can only be used when its extremely dark and in this day and age that's not easy. So light being her one weakness to that power. And with fire, well that's easy to figure out, she can not use it around water or anywhere moist. Water being that power's weakness. Another power consists of Ami reaching out her hands and gathering energy/mana which is purple color for her to use her magic and other abilities like forming and object to hit someone with or flying. Ami can't really fly, she just levitates her body like she can levitate objects. Saying that she can levitate other people too. When shes gather this energy/mana from around her, her hands and wrists glow a purple pulse color. Though one downside is, she can use up a lot of her own energy and can get weak from it.