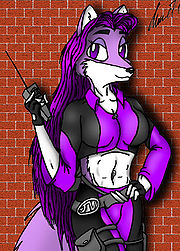 Amethyst is a character in the webcomic Jewel Vixens.

Young, sexy, smooth talking, and seductive, Amethyst makes a good show of being in control of any situation she’s in (a handy talent when in a high-speed vehicle chase), and is considered by many to be the very definition of "relaxed." Having a defining laid-back attitude and a surprisingly sharp tongue to go with it, her easiness with life proves that she loves nothing more than to have a good time. There isn't much that can get her angry (except someone abusing their car, perhaps), which makes her perfect in the various high-speed car chases that the girls end up in. Her driving skills are top notch as well as her mechanical skill, and nothing soothes her like the roar of an engine. Having a family history not only of Native American warriorhood but also of U.S. military duty, her skills as a fighter are also quite notable. Her laid-back attitude combined with her intense knowledge of mechanical technology has lead Aquamarine to develop a friendship with her, which Amethyst herself doesn't mind at all (saying that Aqua's fun to chat with). While not on missions, Amethyst models for various artistic magazines and exhibitions, including nude modeling. In light of this, Amethyst has also developed a friendly rivalry with Jade, where the two trade playful insults and jabs at each other from time to time, mainly focusing on each others' odd personality/lifestyle traits. However, before her supermodel status, she was a hopeful recruit in the U.S. Army as both her parents were respected members of the military. When she chose to stick with a modeling profession, her parents respected her decision (though they did wish that she would have stuck with her saxophone lessons as well). Along with modeling and mechanical work, she has shown interest in becoming a photographer for modeling as well. Her friends sometimes call her “Amy”, for obvious reasons…

Unique as far as silver foxes go, but mainly the grey and white fur colors; no black markings. Her eyes are (of course) deep purple, and her hair is platinum colored with a purplish luster to it. She also has a white fur pattern on her belly reminiscent of her fox breed, as well as a navel ring. Her headfur is long and flowing; almost reaching her knees, and has a single strand of headfur going down her face like a bang. Her breasts are moderate; just big enough for her. She likes to wear light, airy, loose clothing; almost always showing a bare midriff.