This article is about the American werewolf in New York. There is also a Mexican raccoon known as Amadeus Chaffe.

Amadeus (born March 6th, 1984) has been a full-fledged member of the furry fandom since 2003. However, his interest in anthropomorphics - transformation in particular - goes back as far as he can remember. He has a passion for music, as well as for writing fiction and poetry, but refuses to call himself a writer until he feels he has earned the title.

Amadeus graduated college in 2007 and is certified as an English teacher in New York state. He is also a part of the multimedia production company Umgotts Studios along with close friend S. Gatsby. He appears in the mockumentary OMGWTF! Furries (for which he also composed the music), as well as in the upcoming OMGWTF! Furries 2. Amadeus feels that his experiences with the furry fandom have enabled him to achieve a much greater understanding of himself and the wild collective soul within each of us. 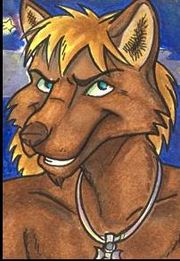 A brown-furred, 6' tall werewolf, Amadeus was once an ordinary human. That is, until he was captured one moonlit night and transformed by a sorceress seeking to replace Diana in the modern age as goddess of beasts and the hunt. Amadeus would have become one of her feral minions but for the amulet around his neck, which unbenknownst to him carried a blessing from Diana herself. Instead, Amadeus retained his sanity and free will, but still cuts a beastly figure every night at moonrise. He has come to enjoy his new form and the abilities that come with it, but some things still take some getting used to - such as the incalculable damage to his wardrobe.

Amadeus in the Media[edit]