Alvin and the Chipmunks Meet the Wolfman

From WikiFur, the furry encyclopedia.
Jump to: navigation, search
Culture > Movies > Alvin and the Chipmunks Meet the Wolfman 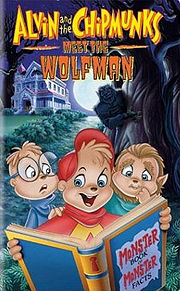 Alvin and the Chipmunks meet the Wolfman

the movie begins with Alvin having dreams of meeting the Wolfman. Dave and Simon conclude that Alvin's been watching too many horror films at night. Alvin says that its because their new neighbor Mr. Talbot creeps him out.

Their school is rehearsing the play for the famous horror story Dr. Jekyll and Mr. Hyde by Robert Louis Stevenson. Because of yet another accident caused by Alvin involving mixing unknown chemicals (and the old pink stuff from Alvin's thermos) that caused a huge explosion that made a huge mess of the school auditorium, Principal Milliken and Dave decide that Alvin be pulled out of his role as Mr. Hyde, and have Theodore play the role to boost his self-confindence. Meanwhile, Alvin and Simon are out in search of proof of werewolves (Munks on a Mission). But no one believes that Theodore is scary enough to play the role of Mr. Hyde. This all changes after he gets bit by a large dog (later finding out that it was a werewolf!) With their brother now a werewolf, Alvin and Simon search for a way to help Theodore and save the school play, without Dave finding out the truth (Little Brother, Mr. Hyde).

Later in the play, Theodore changes into a werewolf and starts to attack Eleanor. However, the necklece Theodore gave her earlier shines by the moon, causing Theodore to remember what happened and soon must fight Mr. Talbot. Theodore cures them both by biting Mr. Talbot, who they find out is going to be their new principal. The Chipmunks and Chipettes end the wrap party by doing their famous performances, and soon everyone else follow the rhythm as the movie ends (Everything's Gonna Be All Right).

Voice actors and their characters[edit]