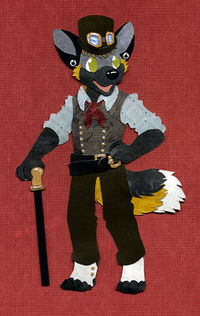 Alshline, real name Ryan, is a fursuiter who lives in Pittsburgh, Pennsylvania, USA.[1]

Alshline has been interested in Furry since 2011, after spending many years being active in the cosplay and anime communities. His fursona is a Cross Fox,[2] and his fursuit character, Saaz, is a Saber Cat.[3]

He likes home brewing beer, cars, gaming and anything steam-punk.[1]