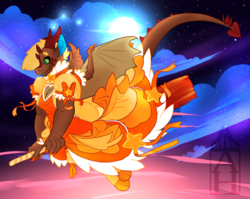 Tai's own work of her fursona dressed as a magical girl.

AlpineHell a.k.a Tai (formerly known as TaiomiFox; born as Jamie Lee Risner, April 14th, 1997) is a furry artist originally from Santa Clara, California, and currently located in Morgan Hill, California. She has been part of the furry community since 2010, starting off as a casual furry roleplayer on GaiaOnline and F-List, becoming gradually more vocal and visual in recent years (most notably 2014-2015 and onward). She is currently a member of Bay Area Furs (BAF) on Facebook and as part of the mailing list.

Tai frequents Tumblr and Weasyl, and plays FlightRising on the side, all under the same name.

In addition to a deep love for art and furry subculture, Tai was once very heavily into riding Motocross for many years before being forced to stop from injury and potential risk. Since then, she has taken up a side hobby as a minor mechanic rebuilding vintage motorcycles, and tinkering with automotive engines during her school years.

Tai's fursona (of the same name) started out in early 2009 as an anthro fox-demon, and has experienced multiple drastic species and backstory changes since her creation, going from Fox to Sergal, to what she is today. Tai is now permanently a member of her very own Certhian species: a lore-heavy race of dragon-oid aliens with the ability to assume their own personal array of anthro, dragon, and human forms. She has slowly been receiving more in-depth backstory and added definition. The shared personality of Tai and her fursona can be described as reclusive, quiet, intellectual, agreeable, but often habitually vulgar in speech. 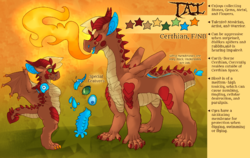 Colors of Conquest by AlpineHell. An experimental painting of Tai's dragon on FlightRising.

The overall style of artwork Tai has produced has changed rapidly and without uniformity over the years, starting with chibi and anime style in 2009, and progressing through various phases and combinations of Realism, Superflat, and Cartoon. Much of her content is inspired heavily by FlightRising, Mass Effect, Mad Max, and her own personal exploits, sometimes including her significant other, and occasionally just portraits of outer space.

To improve the recognition of her works, Tai started pages on Tumblr and Facebook for Infernal Summit Studios (originally known as Monster Master Studios) in order to promote and archive her artworks. This came after she had initially rebranded herself as AlpineHell.

The creation of two minor lore-based original species can be credited to Tai: the Certhians and the Arisi. Info for both species are available on her portfolios. Both species are considered closed or metered, as the only way to rightfully obtain a character would be to tell Tai directly, or win a character creation prize in one of her giveaways. 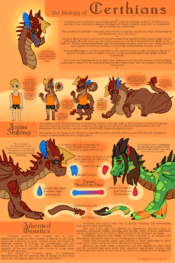 The Biology of Certhians by AlpineHell, detailing pertinent species information.

Tai's biggest ongoing pet-project: The Certhian people are an Oviparous race of dragon-like aliens native to the large garden world of Ne'Daan. They are characterized by the presence of specialized Neurotoxin throughout their bodies that can sicken, irritate, and even paralyze a victim. ovipositors are characteristic of females of the species, and the ability to assume a menagerie of forms from humanoid to full-dragon, giving them the artial ability to assimilate visually into other alien populations. Certhians also possess the unique ability to survive extended periods of time in the vacuum of space, much like the Tardigrades of Earth. This quality is also present in their eggs, which have a thick, flexible outer membrane that becomes tougher after laying with exposure to the outside world. This innate ability to traverse space has been exploited in efforts to help restore their numbers.

The Certhian people have fostered a highly globalized culture, allowing the distribution of knowledge and technology to accelerate fluidly and drive them as a whole towards newer heights. A majority of Certhians are spiritual rather than religious, thanks to the scientifically advanced nature of their society. There are few small religious organizations that exist alongside this global spiritualism, but they form a minority and tend not to see much representation. To sum up Macrocosmic spiritualism in certhian context (as it is best described): it is held that Outer Space (and by proxy, The Universe), is the Origin, Protector, and Destination of all living things. Macrocosmic certhians acknowledge that all matter in the known universe comes from the great homogenous expansion of the young universe, and the resulting births and deaths of heavenly bodies, and that their ultimate salvation rests right back within those heavenly bodies. Many certhians collect star maps and meteorites to honor this ideaology, and even more arrange to have their remains spread into the local star system.

At an unknown point in their history, the species began to see a gradual decline in its ability to hold a high population. High-ranking doctors at the time began attempts to find a solution, but were quickly interrupted by a deadly planetary upset that quickly made the Certhians, along with several other native species of Ne'Daan, to fall rapidly from their spot in the ecosystem. The Certhian people began to fall into a dark age of despair, and before they could fall to further deplorable numbers, they began an effort to send thousands of their eggs into the depths of space in hopes they would be lucky enough to eventually find a suitable hatching ground, and inevitably make it back to their home planet. Others decided to travel off-world to ensure at least some of the next generation managed to thrive. In the end, only around a tenth of these eggs managed to survive into adulthood.

These hardy little bipeds stand just around 3' tall. The Arisi have a wide range across Ne’daan’s major central continent, forming sophisticated village-like settlements that dot the landscape in clusters. They speak regional O’vuas dialects, along with their own ancestral language system that so far has yet to be fully deciphered. Populations of Arisi that dwell in the planet’s warm deserts and equatorial marshes tend to have less fur, and a tougher, scaly hide, while Arisi that dwell in the mountains have long, thick coats of fur and smaller, more delicate scales.