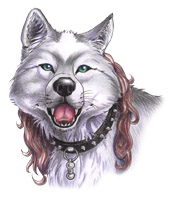 Alpha_Ki is a German furry artist and illustrator. As of 2006, she is studying communications design at the University of Applied Sciences in Augsburg. Alpha_Ki usually attends all major furry conventions in Germany.

Alpha_Ki's furry alter ego is a grey female wolf with both anthropomorphic and quadruped forms. Her fur is mostly of a bright cold gray with darker areas on the forearms and lower legs. There is a dark-grey dorsal stripe running from the ears to the base of her tail, while her bellyfur as well as her toes and fingers are white. Around her eyes, there are white-furred rings, and her forehead shows a white, star-shaped marking. Alpha_Ki has long, curly brown hair.

In both forms (as well as in real life), Alpha_Ki usually wears a spiked black leather collar with a bone-shaped silver pendant.

Alpha_Ki prefers working with traditional media (mostly acrylics and color pencils), although she also uses digital design and illustration. While frequently experimenting with a broad range of artistic styles, she focuses on realistic fantasy, animal and anthropomorphic artwork. Her work is highly acclaimed in Online Galleries as well as Furry Art Shows, and she has won several first and second places in the T-Shirt Contests for Eurofurence and MMC. [citation needed] Furthermore, she has contributed to various portfolios, among them Laced!, the The After Party Portfolio, and Celtic Fur.

Alpha_Ki is the head waitress at the annual Furry Music Cafe taking place at Eurofurence.

In addition to drawing, Alpha_Ki enjoys many forms of expressing herself, including sewing her own clothes and building fursuits. She likes parties, music, dancing, and generally being around friends, but also loves taking long walks in the forest, preferably with her long-time boyfriend Shadowfox. Alpha_Ki has also been an avid pen and paper role-player for many years, and plays Ironclaw.