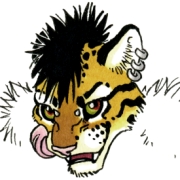 Aloïs, by himself
Aloïs is an anthro artist and corvine/feline therian born and located in France. French is his mother tongue and he can write English fluently. His interests aren't limited to anthropomorphic arts and he is fond of other types of illustration, photography, and calligraphy. His favourite media are inks and watercolours, but he also work with Prismacolor markers and pencils, and can use digital ways as well to colour his works. 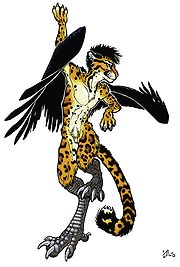 Aloïs is not a fur and does not have a fursona or fictional character he identifies with per se, so as a common raven/clouded leopard therianthrope he uses his animal identity instead in his art and for art trades as a self-representation. While being a therian is an important and unchanging part of who he is, he sometimes likes to add features and modifies his animal-self on the paper according to what he fancies, and does not mind too much when other artists interpret it their own ways, so you may see different variations of the "corvicat" (as his friends labelled him).

Aloïs also is a Female-To-Male transexual and genderqueer person. He is quite passionate about gender topics. He is known for his strong dislike of heteronormativity and transphobia, and may enter into lengthy rants about said topics when confronted with them.