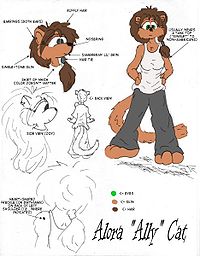 Alora "Ally" Cat (commonly known as Ally or AllyCat) is an South Australian[1] who has been involved in the furry fandom since 2007.

Ally does not consider herself a 'full-fur', but has a lot of fun meeting furs online and in real life. She is a self-proclaimed geek and a fan of Doctor Who, Harry Potter, The Big Bang Theory, Castle, Sherlock Holmes, BBC's Sherlock and most works by Tim Burton. She can frequently be found on the Jack Comic Forum and Fur Affinity, where she claims she is no artist but just likes to show off art she has had done for her, in hopes that the artists gain more work.

The first is 'The Misadventures Of Everyone' (or 'T.M.O.E' as it is more commonly known now) by TorenZabbic on Fur Affinity. The comic has recently started to be uploaded to Drunk Duck. In the comic's sequel 'Slackerz FFG', Ally appears as a ghost, becoming the resident Poltergeist, Banshee and love interest to the comics Grim Reaper-like character, Scythe.

The second is 'Comicarotica' by K.L. Sanchez on his webcomics site 'SS Comix'. She takes the part of the 'Female Friend', often the brunt of jokes by her two male friends, Playwright (PW) and Demus. 'Comicarotica' was Ally's comic debut.