All the Newshounds Fit to Print 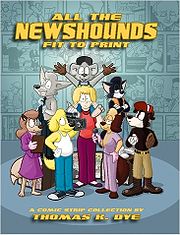 The cover of All the Newshounds Fit to Print, the seventh Newshounds compilation by Thomas K. Dye.

All the Newshounds Fit to Print is the seventh compilation of comic strips of the webcomic Newshounds by Thomas K. Dye. The book covers the comics between 13 October 2003 and 8 December 2006, which were the last comics created in the first Newshounds series. It was published by Lulu, a change from Plan Nine Publishing, and includes several extras, including an introduction and overview to the strip.

During the run-up to the 2004 election, Sam and Alistair end up arguing as to whether the Democrats or the Republicans will win. In an attempt to stop the arguing, Lorna promises them that if they both stop talking about politics, both on and off the air, she will give them bonuses, to which they agree.[2] Later, Sam makes another bet with Alistair as to who will win the election. If John Kerry has a clear win, Sam will have to be the "Kumquat Kanine Klown" in the farmer's market. If George W. Bush has a clear win, Alistair will be forced to become the goalkeeper for an elementary school ice hockey team. They agree with the second bet.[3] Bush wins, but because the victory is not clear, Alistair does not have to become the goalie. Alistair tells Sam that he is willing to be the goalie, but Sam changes his mind.[4]

Kevin becomes annoyed by Ferris's latest craze, the singer Faith Daddiscash. He still dislikes after listening to all of Ferris's albums. He tries talking to both Alistair, Sam and Renata both claim they like her as well. It is not until he hears a song on the radio which turns out to be hers that he begins to like it, but when he tells Ferris, he claims it is the worst of Faith's songs.[5] In the end, he decides to listen to his own music, which turns out to be Della's favourite.

Wolfram is horrified when he learns that a drug that he uses to keep his fur glossy, FG-909 is taken off the market because harmful side effects. As a result, he asks Alistair for his help in organising a protest against the ban.[6] After the protest fails however, he takes matters into his own hands, or rather paws, by creating positive news stories about the drug. But after he fails to get his bulletins in the news broadcast, and everyone he interviews being for the ban, he finally caves in and gives up.[7]

Later, Wolfram goes out to dinner with Rochelle, where he makes it clear that his life is no longer all about him, but about them, so he therefore asks Rochelle to marry him, an offer which she accepts.[8]

The Last of Della and Randy (20 September - 5 October)[edit]

Some of the KPET staff decide to have a night out. Kevin goes out with Della, Sam with Randy, and Wolfram with Rochelle. During the date, which features music played by Gene Catlow and CatsWhisker, Sam and Randy continue to have problems.[9] However, the problems truly arise when Randy's other boyfriend Vladimir is found at the same bar, at which point, the whole relationship falls apart.[10] Afterwards, Della makes her final preparations, and leaves Kevin, not knowing when she will return.[11]

After breaking her tooth eating some candy samples, Lorna makes an emergency dental appointment. However, after her treatment, she ends up in a hallucination. As a result, she now thinks that she is a dog, and her staff are now humans.[12] She also ends up believing that she is not the owner of KPET, but is just the mascot of the company.[13]

Despite their best efforts, the staff fail to make Lorna realise that she is human again. Things become worse when Virgiltech calls KPET in order to discuss their contract. Lorna, under her current state, says that a dog cannot discuss the contract, but after some talking to, she agrees to talk to Virgiltech, but when she calls Wolfram a human, the company decide to cancel the contract.[14] What is worse, with Lorna being declared legally incompetent, there is a danger of the company going into receivership.

Ernest however attempts to come up with a plan to save the jobs of everyone at KPET, but everyone is mortified when they discover his plan is to sell KPET to KRVL.[15] Everyone tries to think of ways to save the company, include a poor attempt by Kevin to disguise himself as Lorna,[16] but luckily, they are saved when Lorna, with Julia's help, finally comes out of her hallucination.[17] As a result, she puts a stop to the deal, and frees KPET from their relationship worth Virgiltech.

After this, Julia helps Wolfram and Rochelle with their wedding, despite her allergies, and the couple wed.[18]

Ernest is contracted by an oil company consortium to negotiate with "Sunflower Chemicals", mainly over an additive to clean up fuel that Hal is developing, but when he learns that he is a dog, he refuses to talk with Hal. However, Ernest decides to sort the whole thing out by buying Hal. As a result, Ernest becomes the owner of Sunflower Chemicals.[19] Hal refuses to co-operate with Ernest; Ernest asks Renata to see if she can make him work. She at first refuses, but then agrees.

Hal and Renata therefore try to come up with a plan in order to get Ernest to let him go. This is done when Hal decides to perform his experiments into the additive in Ernest's flat for three weeks.[20] As a result, Ernest gives up and lets Hal go free.

Rochelle and Ferris decide to create their own traffic reports, without Lorna's approval. All goes well until Rochelle corrects their helicopter pilot, telling him that Ferris is a rat, not a koala bear, thus provoking the pilot's phobia of the animals.[21] As a result, the pilot crashes the helicopter. Rochelle ends up with some server injuries, whilst Ferris escapes mainly unhurt, but guilty. However, the main shock comes afterwards when Wolfram tells Rochelle that she is pregnant.[22]

Lorna returns home discover that the chief managing officer of MegaNewsWest, Dover Whitecliff, wants to talk to her. Lorna comes into some shocks. First, she discovers that Dover's wife is Kim Yuasa, an old school friend whom she fell out with after she failed to pay a check at the old animal shelter Lorna used to work at.[23] Second, Dover wants to over Lorna the post of Head News Editor for MegaNewsWest.[24] Lorna is unable to make her mind about taking the post, as it would mean shutting down KPET and putting everyone else out of work. As a result, Lorna goes out for a walk to think about it. Then she goes on a short holiday to think about it. Finally, she makes an agreement worth Dover that she will take the job, on the condition that everyone else in KPET is given a job as well. The jobs will not be same, and they would be work for Dover instead of her, but on the other hand they would be paid more and be given mainstream respect.[25] Everyone agrees to the terms. At the same time, Rochelle goes into labor, and Della arrives at KPET.[26]

The opening section of the book is an introduction to the Newshounds story, starting from when Lorna was a baby. It continues from there, into her childhood, her job at the animal shelter and the foundation of KPET. After this, there is a summary of the strips by year.

The book also features bonus strips that had not been published in previous books, as well as a commentary on the strips by Dye himself.