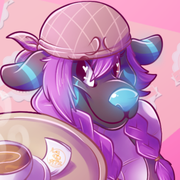 Alkaris suffers from cyclic neutropenia, but despite from having that they have pretty normal lifestyle. They rarely ever talks about themselves or their personal life, except to those few who are closest to them

They have some gender identity issues, initially identifying themselves a heterosexual] male, then as bisexual, until rediscovering finally as to be genderfluid. Alkaris is okay with them being called by any of the "he/him/his" and "she/her/hers" pronouns. They often struggle to understand themselves sometimes, but they are quite often generous, kind and gentle, and often funny in their own way at times.

Alkaris had only ever used Microsoft Windows based PCs from 1995 to 2008, but now primarily and actively uses Mac OS X and Linux operating systems together for everyday things. Alkaris loves Information technology related works to do with computers, the technical knowledge on computers stems from an early age just by simply playing around with computers. Around 2008-2009, they began to grow interest in IT security and networking to develop a better understanding in the new digital age.

Alkaris is quite an avid gamer. Prior to owning a home console, they used to play MS-DOS PC games on 3½ inch Floppy disks. Their first home console was a Nintendo 64. They have been into many kind of game genres on various platforms, but most particularly have a strong liking for Action/Adventure, Puzzle, Strategy and FPS games.

They enjoy many game series, their favorites being Nintendo's The Legend of Zelda. Alkaris has also taken an increased liking toward PC gaming, and enjoys to use Valve Corporation's internet-based digital distribution client application, Steam, where they play some popular title games such as Team Fortress 2.

One of Alkaris dreams was to become a video games tester, after being inspired by an old friend who was also a game tester, although they are unsure whether if they should still pursue this dream job.

Alkaris is quite active on Twitter, with daily ramblings about anything and everything.

Their fandom name is taken from a similarly named wolf character they created.[1]

Alkaris has been very interested in doing collaborative works with other artists to help themselves improve in their own works to be a little more recognizable. Alkaris offer themselves to color pictures for others for fun or just for something to do to improve on coloring techniques for their future works.

Alkaris also do a little of music mixing and video editing, posting videos to YouTube every now and then, mostly recordings of video games, hoping to expand their videos endeavors with a dedicated video gaming channel under the proposed banner studio name Tearful Wolf Studios, a name established back in 2009 which they have been using on their works as their own trademark name.