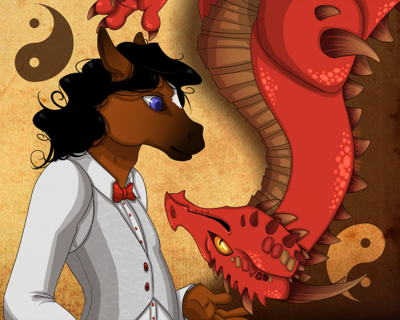 Alizar Kazam, also known as Kazam, or Alakazam, is a furry writer/poet who lives in the Cleveland, Ohio area. His name makes up his two fursonas Alizar(an anthro-dragon) and Kazam(an anthro-horse magician). Using the Yin/Yang as inspiration, the two (wizard and dragon) play off of one another and have both been around for centuries.

Here is the background for each:

Forced to fight most of his life, he wants power to protect his clan and will do anything to get it. Ends justifies the means for him...sacrafices will be made. Abandoned by his father, he witnessed the murder of his mother and hunts for the killer. He has a rough exterior, but can still show a little love. He is bi-sexual. He is the second hatchling born from a clutch of about 4 or 5 eggs, and has one brother and one sister living. He acts before he thinks, but still has those who respect and fear him. He's a fighter who has a temper and inner demons. His home is a volcano off the coast of modern-day Greece.

Immortal due to an accident around the age of 29 and lost his father(all magic comes at a price). He is homosexual. He doesn't want to fall in love, but he does, knowing they will die before him. An only child born around the middle of the 16th century in a Mexican jungle, his family came over with the Spaniards and settled in the Aztec community. Son of a seer/wise mare, he can read the stars, heal some injuries but cannot bring anyone back from the dead. He knows the location of the city of El Dorado, and is one of its protectors. He has journeyed around the world and has acquired much knowledge. Like the Aztecs, he worships the sun god, but left on a journey because he grew not to fond of sacrafices for blood. He is strong, thinks before he acts, and is overall happy to be a nomad and kind to others.

Alizar Kazam's last story was "Blake's Journey" and was 27 pages double-spaced. He has been a furry since around 2010. He is the furry father of Goldenwolf_(fursuiter). He has 2 furry brothers: Zharr_J.Wolf and Kael Falconvale; also 1 furry sister, Lily Otter. He is a single gay non-denominational Christian. 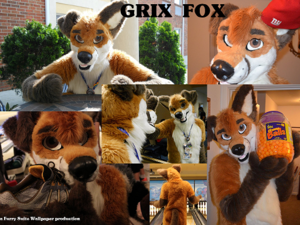 Furry Suite Productions is the label used by Alizar Kazam in making desktop wallpapers and other projects for fursuiters. He does so with their permission and with respect to them and their suit makers.