Married to Zeek Harrison, Alister is a moderator on the The Furry Sanctuary forums. 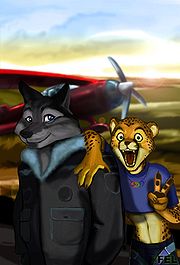 Alister and an alternate character, Mahiri, as done by Fel
Alister's nickname, The Skywolf, was coined by one of the Furry Sanctuary members in mid-2004, referencing his passion for aviation. The name "Skywolf" is a play on the title of the 1980s television show, Air Wolf. At the time, he was not yet in flight training, though wished to pursue one.

As an enthusiastic collector and commissioner of anthropomorphic art, he is often depicted in World War 2-era military flight clothing in his commissioned pieces: His favorite era of aviation.

Alister is a native of Missouri, where he grew up, but has also lived in Arizona, New Mexico, California, Alaska, and Idaho. He joined the Air Force in 1999 and is still serving in active duty status.

He is currently working towards an undergraduate degree in atmospheric science through correspondence courses offered at his current station, enjoys working on his small collection of classic cars, collecting firearms, sport shooting, ATVing, motorcycling, and cooking.

After discovering the online part of the furry fandom in 2001, he joined several forums, artsites, and began making contact with furs from all over the world via instant messengers. In 2004, he helped Rwanda create the relatively unknown forum, Furrville, soon after he was nominated as a moderator on The Furry Sanctuary.