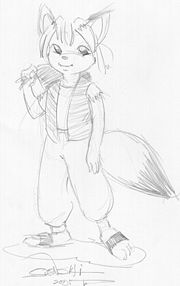 Alicia Retban is a small fennec who frequents FurryMUCK, Tapestries MUCK, and Furcadia. She has been in the furry fandom since June 2003. Her player has also appeared at FurCon 2005 and 2006.

Alicia seems to be a very simple, outgoing girl. She sports pink hair (usually tied back in a ponytail), green eyes, and a black-tipped tail. Contrary to the usual markings of a fennec, her fur is a flat shade of light tan. Depending on the artist, this color can range from a light peach hue to sandy yellow and even to a burnt sienna color.

Alicia's normal clothing usually consists of a white T-shirt, an orange vest, and neon green parachute pants held up by a purple sash tied at the side. When it is required, she may wear sandals made of sandalwood.

The missing left sleeve traces its roots to the very first piece of artwork done of the character, by JJKitsune. In drawing it, he was working from a Furcadia sprite, and thus did not have any real details with which to work from. Once the non-colored image was complete, her player noticed that Alicia's shirt was missing a sleeve on the left side, due to JJ having to constantly redraw the arm.

Alicia has no parents (or at least, no reference is made as to family members, dead or alive), and it is to be inferred that she is homeless. Alicia Retban's last name is an anagram of the word 'Banter'.

Alicia's bouncy, overtly cheerful nature has been noted as being somewhat superficial; she has hardly ever shown any emotion aside from that of zeal or boredom. It is possible that she may possess ADHD, the claim of which is only further enhanced by her repeated showing of a short attention span. This rarity in depression can also possibly be attributed to Sunnydale Syndrome.

She also has a history of interjecting her speech with various light, foxlike noises (Variations of the false word, "Mrf") in a fashion not unlike that of moogles' use of the word "Kupo". Unlike the latter however, it has been admitted by her that this is not a word, but merely a habit.