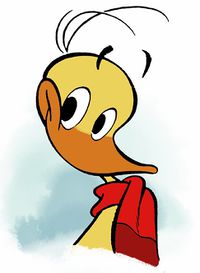 Alfred Jodocus Kwak, commonly known as Alfred J. Kwak, is a funny animal character of furry interest that stars on a Dutch theatre show by Herman van Veen, and later animated as a television series in 1989 by VARA and Telecable Benelux B.V..

The television series consists of 52 episodes, with the characters designed by Harald Siepermann.

Alfred J. Kwak was born as the son of Johan Sebastian and Anna Kwak. Some time after his birth, Alfred loses his parents and his brothers and sisters who died when a car hits them. Henk the mole, a good friend of the Kwak family, raises the little yellow duck. Alfred experiences a lot of adventures.

Unlike many other cartoons targeted for children, Alfred J. Kwak features exceptionally mature and often sad themes. Amongst others it deals with different social and political issues, such as abuse of power, but also raises important values such as friendship and solidarity.

The cartoon is also notable for the political themes on which it touches. In the cartoon, Alfred fights against a fascist dictator, takes in refugees fleeing from a country under Apartheid (with white geese and black ducks), saves whales against hunters, and oversees the changeover of his country from an absolute monarchy to a constitutional monarchy. Such themes are far from typical in a children's cartoon, and form a big part of Alfred J. Kwak's appeal. Other episodes have satirised the Japanese love of golf, and criticised countries which have sharp north/south economic divides.

The cartoon is also unusual for the subtlety of its long-term narrative. In most children's cartoons, the characters do not age. In Alfred J. Kwak, we see the progress of the main characters from very young children to adulthood as the series progresses. This is particularly striking in the character of Dolf. At first a mere naughty schoolboy, we watch as his evil steadily progresses.

The series has been broadcast in many countries and has been dubbed and subtitled in Dutch, French, Japanese, Greek, English, Hungarian, Italian, Spanish, Hebrew, Arabic, Finnish, Serbian, Polish, German, Swedish, Danish, Icelandic, Chinese, and Norwegian.

In 1991, Herman van Veen won the Golden Camera, the German television award, for the animation in this cartoon.

Great Waterland (Groot-Waterland in Dutch) is arguably the most important setting within the series. It is Alfred's birthplace as well the home, or future home, of many of the shows characters. It is, partly, a caricature of the Netherlands. The land consists of polders, the town Alfred lives in is build in a typical Dutch style, while he himself lives in a house made from a clog. In addition; many of its inhabitants wear traditional Dutch clothing, perhaps most notably Alfred's parents. For most of the series Great Waterland is an absolute monarchy, led by Franz Ferdinand: a lion. Near the shows conclusion Dolf assumes command, and Waterland briefly becomes an authoritarian fascist state, before reverting to a monarchy and eventually becoming a democracy.

The show has had some PAL VHS releases in the United Kingdom and Germany (as spotted on Amazon.co.uk and Amazon.de), but does not appear to have an NTSC release in the United States and Canada.[citation needed]

A DVD Region 2 box set of the whole series has been produced and is sold in the Netherlands. An English DVD release was made late 2007 and is now available to buy on Amazon.com [2].