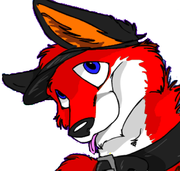 FuffyFox, aka Phalanxfox Begley (born November 18, 1984) is a furry from Boston, Massachusetts, U.S.A. His fursona is a red fox with fluffy white and black paws.

FuffyFox has been a member of the furry fandom since early 2007 when he discovered it exploring the internet in his college dorm room. He uses Anthrochat IRC but is also active in furry communities on Twitter, Furaffinity and Youtube.

He is a member of East Coast Furs and New England Furs, and a moderator for a handful of groups on the social networking site Furspace. In 2014 he created a second fox character named: Yarf Fox Harlequin.

As at October 2013, FuffyFox works nights at a Fortune 500 drug company and spends his days working from home as a Certified Day Trader, managing his own robust portfolio. He has learned investment banking from several of his College buddies who have gone on to work at several successful Wall Street firms with offices in the Boston area.

He has traveled to places including London, Spain, Costa Rica and Aruba, and across the majority of the United States.

Some of FuffyFox's hobbies include politics, fine dining, wine tasting and dancing in night clubs. He loves to attend raves and listen to techno music.

Recently, he has taken an interest in the Industrial Dance music scene, and has started attending events specializing in such music.

He earned a Bachelors Degree from a Massachusetts University in 2009.