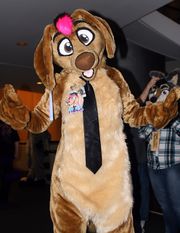 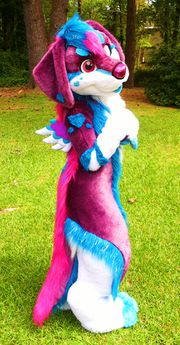 Alex first discovered the fandom at age 16, while on an obscure fanart site. Even at an early age, Alex has always found anthropomorphic animals quite fascinating, even drawing animals with human-like qualities at age five and attempting to dress-up as them.

Alex created her fursona in 2009 and the character has gone through many changes since then.

As of January 2014, she is currently dating Hope, a black wolf with flaming appendages. Alex owns two pets, a dachshund and a Chihuahua.

Her fursona is updated and is now a Chihuahua.

Alex is a miniature tan and cream dachshund with medium-length fur and brown nose and pawpads. He has dark brown hair with magenta bangs. Alex has jokingly been referred to as a "scenedog on ritalin" due to his lack of bright colors. Alex's personality is friendly, playful, random, and mischievous.

The first Alex fursuit was made by Lobita Works in 2010, and the latest and current suit, made by Phoenixwolf33, commissioned in 2012. The Lobita Works fursuit is officially retired and has been altered and sold as a generic dog suit in 2013 to Gazi.