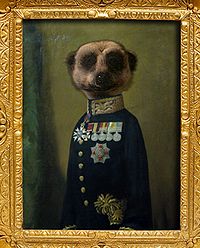 Aleksandr Orlov is a fictional Meerkat featured on a series of advertisements in the UK. The character is voiced by English actor Simon Greenall.

Aleksandr is the main character of a series of advertisements by VCCP for the car insurance firm Comparethemarket.com. The adverts, which first aired in January 2009, feature Aleksandr - a Russian meerkat and website owner - expressing his frustration to the audience at how many people are confusing comparethemarket for his own website, Comparethemeerkat.com, and repeatedly attempts to show people the differences between the two sites.[1]

Little is revealed in the advertisements of Aleksandr's personal life, other than that he is Russian and an aristocratic website owner. However, his homepage on social networking site Twitter has revealed a great deal of information about his family, such as his "greatest granddaddy" Mikhail Orlov, who fought in the Meerkat-Mongoose War of 1728 (possibly a reference to the Great Northern War of 1721), and that his grandparents survived the Furry Terror of 1921 (referencing the Russian Civil War).

Comparethemeerkat.com is a real website, and a self-referential parody of Comparethemarket.com.[2] The site does indeed allow users to compare meerkats, sorting them by size, location and hobby. As a result of the advertisements, comparethemeerkat has become among the most viewed websites in the UK, outpacing the product it was originally intended to promote (i.e. comparethemarket).

Aleksandr Orlov has become a national star in his native United Kingdom, where his catchphrase "Seemples!" has become widely known. It has also been reported that his own page on social networking site Twitter currently has more hits than that of celebrity Kylie Minogue.[3]