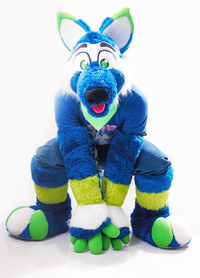 Alduin (born December 26, 1989) is a fursuiter from Manila, Philippines. His fursona is a husky with a fear of children ripping his fur apart.

Alduin has been a furry since 1997, and became interested in drawing anthropomorphic characters after following the web comic Housepets by Rick Griffin.

After seeing videos on YouTube on fursuit construction, he decided to make his own fursuit. With some help from a known boutique with sewing his fur, he made the first of the two versions of the suit.

Alduin appeared on national television in the show Kapuso Mo, Jessica Soho. This was the first public introduction of furries to the country, as the subculture was not previously known in modern Filipino culture.

Alduin has since been actively roaming the air-conditioned malls and convention centers around the city. He announces the date of his visit and location through his Facebook page. 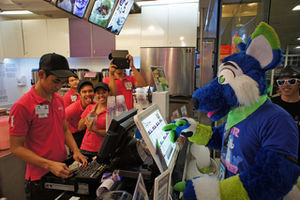 On his free time, Alduin records his rants for a particular group of audience that admire his schizophrenic, tongue-in-check comments about politics and culture. Influenced by The Ranting Gryphon in trying to educate society, he mimics 2's ability to discuss matters humans may try to avoid and forget altogether. Although Alduin may not be as good, he does his best to keep himself sane as possible while ranting before becoming a mad dog.

He is also a brony, watching and drawing ponies whenever he can at his office or at home previously in Rose Brook, NC.