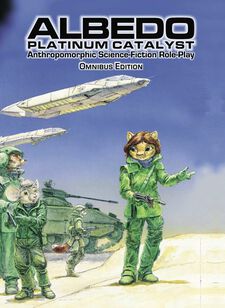 Albedo: Platinum Catalyst is a role-playing game by Sanguine Productions, based on Steve Gallacci's long-running Albedo Anthropomorphics. Players take on both the roles of the commanding officers and their subordinates. The game was co-written by Rafferty and Pyat.[citation needed]

It had been centuries since the peoples of Arras Charka learned that they had been abandoned by their Creators. But after colonizing dozens of worlds, they were no closer to solving the mystery of where they came from. As the ties that bind them are stretched thin, war erupts among the many planets, colonies, and space stations. The greatest threat rises from the Independent Lapine Republic, who declare themselves master of all races, waging a campaign of destruction and death against all that oppose them. As the Confederation quickly assembles its own Extra-planetary Defense Force, tensions rise, mistakes are made, and people live in fear, uncertainty, and doubt of what the future might bring …