Anthrocon, or just AC, is a furry convention held yearly during the summer in Pittsburgh, Pennsylvania, USA. Formerly the world's largest furry convention, with an attendance of 7,544 in AC 2017. Later during that same year, it was surpassed by MFF.

In late 1998-1999, the chairmanship of the convention was transferred to Dr. Samuel Conway by Points, and they formally organized the group as Anthrocon Inc., and later renamed the convention to "Anthrocon", and relocated it to Pennsylvania. Its first venue was the Hilton Hotel of Valley Forge, Pennsylvania in 1999 and 2000. Due to a rapid increase in attendees, it was forced to relocate to the larger Adams Mark Hotel of Philadelphia, Pennsylvania in 2001, where it became the largest furry convention ever held, with 1,457 attendees.

Security for the convention has been provided by the Dorsai Irregulars from 2002 until 2019. 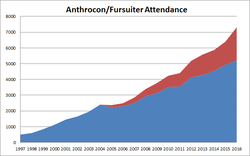 The 2006 move to Pittsburgh was envisioned by AC's Board of Directors before the sale of the Adam's Mark Hotel took place, due to AC's increasing attendance. AC began soliciting people's opinions about moving to Pittsburgh in October 2004. At the time, the convention was already too big for any affordable hotel in Philadelphia, and the Adam's Mark had the most convention space of any hotel of its size in the city before its demolition. The closing of the Adam's Mark simply moved those plans up a year.

While some were opposed to the move, most were supportive of it. Many attendees who supported the move lived out of Pennsylvania and the move made little difference to the trip there.

The chairman of the convention is Dr. Samuel Conway (also known as Kagemushi or Uncle Kage by attendees), who oversees AC's operations with the help of staff and volunteers who donate their time and energy throughout the weekend to assist the multitude of small tasks that arise. 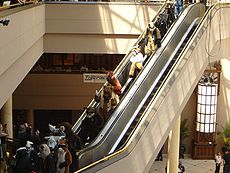 Anthrocon, Inc. was incorporated as a non-profit organization on June 25, 1998, and registered as a 501(c)(7) social and recreation club in the state of Pennsylvania (entity 2823650). This classification differs from the 501(c)(3) status of Midwest Furry Fandom and Anthropomorphic Arts and Education, most notably, donations are not tax-deductible to their donors, but in return, the company has more flexibility about its operations, and more leeway to restrict access to non-members, since it's not a club.

Applications to register the word "Anthrocon" and the 'Anthrocon paw' as US trademarks were filed on September 18 and November 12, 2006. According to these filings, the word "Anthrocon" was first used on February 1, 1997, while the paw logo was used from June 30, 1998, onwards.