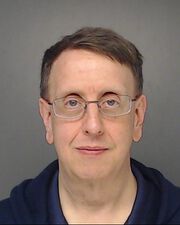 On May 28, 2009, Berlin was arrested on accusations he propositioned a fifteen-year-old boy over the internet.[2][3][4] After the boy's parents found sexually explicit messages on his computer,[4] they contacted the Attorney General's Child Predator Unit,[3] and forty-eight hours later Berlin was arrested.

According to investigators, Berlin communicated with the boy on seven different days between April 27 and May 25, 2009, in a series of instant messages and online chats.[3] It is also alleged that Berlin offered to arrange a meeting in a hotel room so he could take photographs of the boy and another adult having sex.[3]

Berlin was arraigned before District Judge George Zozos and taken to the Dauphin County Jail on $250,000 bail.[4]

Having been unable to reach a verdict in the first trial, Berlin's second trial began in March of 2012. Jurors took just over an hour to deliberate, before finding Berlin guilty of all charges. [9]

Investigators believe that Berlin and the boy met on a furry internet site.[3] When Berlin's home was searched, wolf and cat-like costumes were found.[4]

It is alleged that Berlin discussed dressing up in animal costumes and engaging in sex with the boy,[3] and that he proposed traveling to the boy's home and having sex in the backyard and in a shed on his parents' property.[3]

Some articles state that a panda costume was also involved,[10] but this appears to be a later embellishment, as the original sources only refer to the wolf and cat costumes.

Some of the messages originated from a computer in the Pennsylvania state senate[3] where Berlin had worked since 1993,[3] as an aide to republican senator Jane Orie.[4] Upon hearing of the allegations, Senator Orie suspended Berlin without pay, and he was later fired.[4]

Alan T. Panda placed a personal ad titled "Looking for a Babyfur for a Long-Term Committed Relationship" on Pounced.org which he last modified on April 2, 2009.[11] He describes himself as a gay "Daddyfur and Caretaker" who is "looking for a babyfur to be my mate and companion in a long-term committed relationship." He states that he "likes to wear diapers at times" and occasionally likes to be babied.[11] He states he is looking for a babyfur "who is between the ages of 20 and 25 (we can talk about edging that either direction)" and enjoys being babied although "doesn’t want to be a baby 24/7" and, among other points, "who is willing to relocate".[11] The ad has since been removed from Pounced due to the controversy surrounding Alan, though an archived version can be viewed on Google's cache.[11]