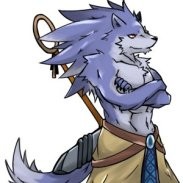 Akwawo Owawka or Akwa is the fursona of a Canadian furry fan. He is mated with Shadow Hinitashi and lives with him in Arx Animalis.

Akwawo Owawka is a Fusky. His fur is light blue except for his muzzle, throat, chest and belly which are white. He has a long mane that is adorned with one long black feather. His very fluffy long tail has a white tip. His bodybuilt is Average and he likes it this way.

Akwawo is a shapeshifter. In addition he controls the elements of Water and Ice. He is a mage who likes developping new magicals things. Since he lives in a Castle, He has to protect it with all his might

The dualism of Akwawo Owawka's name refers to his split character. While Akwawo is the common kind hearted and wise judging character there is another character called Owawka. This other character appears rarely and unpredictable. When Akwawo changes to Owawka his fur color becomes dark blue. The areas which were white turn into black. Owawka is very agressive and likes to spread sorrow.