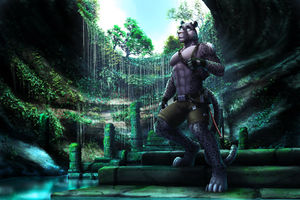 Artwork made by Dream and Nightmare in honor of Akira7's memory

Akira7, also known as AkiraVII (born July 14th 1991, died March 26, 2018), was a furry fan who lived in Germany in the vicinity of Dresden. He worked as a nurse in a hospital. The number seven in his username was chosen because it had a very special meaning for him. His fursona had a tattoo with the number seven on the arm as well.

Akira was a passive member of the fandom roughly since 2010. He became an active member in early 2017 and joined Fur Affinity on January 2, 2017. He was also noted to be a big fan of artist Dream and Nightmare, and writer Gruffy. He was planning to go to the Eurofurence 23 - but a foot injury prevented him from attending. End of August 2017, he became an active member in the German Furry forum furbase where he made a number of friends. He was looking forward to attend Eurofurence 24 and meet several of his friends there.

On April 7, 2018, furry artist Dream and Nightmare, revealed on his journal that Akira7 has passed away. [2]