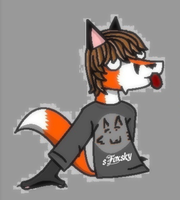 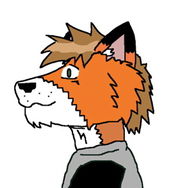 Sean Renard was first introduced to the fandom through furry videos on YouTube. After finding interest in anthros, he decided to join and joined the fandom at the age of 12 in October 2008. Since then, he has come to gather a group of close friends at Fur Affinity, including users with vulpine characters such as Lord Blake and Cmd246.

Some of his drawings are in a "Heart of it All" style,[clarify][citation needed] influenced by one of his favorite artists, Immelmann.

Sean Renard, or just Sean, is a red fox with black markings and medium-length brown hair. He stands about 5' 8" (1.7 meters), and is normally seen wearing long-sleeve T-shirts and jeans.

He enjoys any kind of rock, his favourite band being MGMT, and likes playing guitar. He can be relatively immature at times, considering his age, but normally is very outgoing and friendly.

Over the years, certain changes have been made to Sean such as his hairstyle and the addition of black markings on his muzzle.